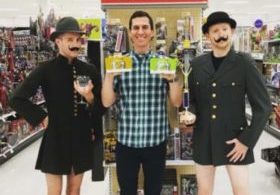 Despite a high tech background as a software entrepreneur, Utter Nonsense creator, Tim Swindle, went decidedly low tech with his first foray into creating board games. Tim and his friend developed the basic concept for Utter Nonsense over several years while on weekend getaways and needing some entertainment for the group. It began as a simple hat trick: two piles of paper, one with accents and one with ridiculous phrases. Each pile went into a hat and players pulled out a combination of an accent or impression along with a phrase. Then, on one fateful New Year’s Day, they decided to take the basic concept of this game they had been playing with friends for years and turn it into Utter Nonsense. Utter Nonsense encourages players to step outside their comfort zone and engage with each other, without the distraction of technology.  Although he had no prior experience with writing or developing board games, Tim grew up playing games with his family, which cultivated his love for bringing people together to laugh and have fun, and led to the creation of and motivation behind Utter Nonsense.

The meticulousness and ambition that Tim fostered in his professional career beforehand served him well in the undertaking of Utter Nonsense. He says, “Since we had no background in creating games, every step required research. For instance, we had to Google ‘how to design a board game’ and ‘how to manufacture cards.’ It was all new to us, but we took our time, asked a lot of questions, and found great partners to help us throughout our journey.” Their Googling skills paid off. After launching on Kickstarter, they were fully funded a month later for their first production run.  Shortly after their successful Kickstarter campaign, their first version of Utter Nonsense hit the shelves in Target. Because this version originated amongst adult friends, the content was geared toward people 18+. This led to the name becoming Utter Nonsense: Naughty Edition. After two years of success, Tim, along with his sister, Shannon, decided to create a family-friendly edition of Utter Nonsense.

After PlayMonster acquired Utter Nonsense in January 2018, Tim has continued to work in the industry introduced to him by Utter Nonsense. He enjoys developing and creating new game concepts and hopes to make people laugh and have fun, for a living.