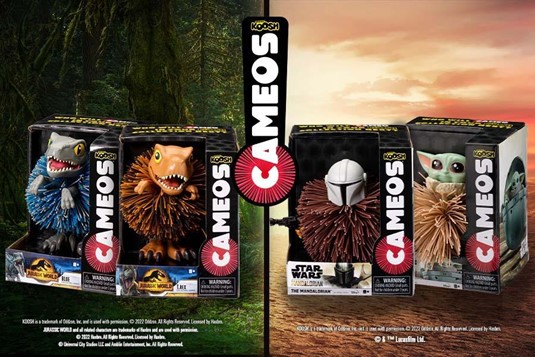 BELOIT, Wis. (October 6, 2022) — PlayMonster Group LLC is bringing fandom to the palm of your hands with the launch of new Koosh Cameos, the iconic brand from Hasbro, a global branded entertainment company! For a limited time, fans can pick up four all-new Koosh character collectibles (two from Jurassic World and two from Star Wars, The Mandalorian), inspired by the brand that brought the world the iconic Koosh Ball!

These collectible Koosh items combined with sculpts of classic fan-favorite characters gives fans of all ages an opportunity to showcase their fandom in a #KeepItKoosh way! Whether your goal is to play or display these products, consumers are in for a treat this fall!

“As a team of long-time Star Wars and Jurassic World fans, we’re very excited to share these fan-favorite characters, in Koosh form!” says Sakita Withers, Global Brand Manager at PlayMonster. “These brand-new collectible products are the first in our new Koosh Cameos product line, and we can’t wait to share them and expand on the line’s character variety in future launches!”

Following the brand’s successful launch of the Koosh Flix Stix with YouTube mega-stars Dude Perfect this past August, the team is ready for another big win. Koosh Cameos will be available soon at an Amazon, BAM or Kohl’s retailer near you, make sure you keep an eye out for these highly-anticipated, fan-favorite Koosh items:

To learn more about Koosh Cameos, and everything PlayMonster, please visit Playmonster.com.

From Universal Pictures and Amblin Entertainment, Jurassic World immerses audiences of all ages in a new era of wonder and thrills where dinosaurs and humankind must learn to coexist. Jurassic World is more than a film franchise. At every turn, this $5 billion film series delivers a larger-than-life destination for exploration, discovery, and epic adventure. Dinosaurs live again and they live in Jurassic World.

Hasbro (NASDAQ: HAS) is a global play and entertainment company committed to making the world a better place for all children, fans and families. Hasbro delivers immersive brand experiences for global audiences through consumer products, including toys and games; entertainment through eOne, its independent studio; and gaming, led by the team at Wizards of the Coast, an award-winning developer of tabletop and digital games best known for fantasy franchises MAGIC: THE GATHERING and DUNGEONS & DRAGONS.

The company’s unparalleled portfolio of approximately 1,500 brands includes MAGIC: THE GATHERING, NERF, MY LITTLE PONY, TRANSFORMERS, PLAY-DOH, MONOPOLY, BABY ALIVE, DUNGEONS & DRAGONS, POWER RANGERS, PEPPA PIG and PJ MASKS, as well as premier partner brands. For the past decade, Hasbro has been consistently recognized for its corporate citizenship, including being named one of the 100 Best Corporate Citizens by 3BL Media and one of the World’s Most Ethical Companies by Ethisphere Institute. Important business and brand updates are routinely shared on our Investor Relations website, Newsroom and social channels (@Hasbro on Twitter, Instagram, Facebook and LinkedIn.)