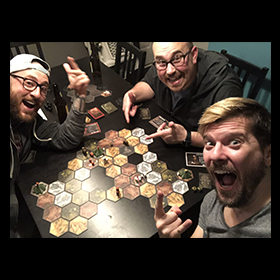 Strategy games. That’s a groan-worthy phrase for some people, right? The “non-gamers”, as they’re known, hear that phrase and run for the hills. The stereotype is that strategy games are long, boring and complicated, but that’s not the case. It’s just one genre of games among many different genres. So, those who love strategy games simply find others who do as well, and they form groups and communities to happily play together.

Daniel Aronson, Michael Howard and Nick Tompkins were (and still are!) three such friends who enjoyed playing strategy games! While they had no complaints about their regular game groups, they really missed sharing their passion for strategy games with their “non-gamer” friends and relatives. They felt there could, and should, be games that filled the gap and allowed more game lovers of all types to play together, and so they began making one!

“We realized that we could create a strategy board game that we absolutely loved, while making it accessible enough for our friends to jump into the strategy genre with us.” – Nick Tompkins

At the time, Daniel and Nick were working together with Daniel’s creative agency out of Daniel’s home. The two grew up together and had been friends since they were kids. Michael, a touring guitarist, lived a few houses down from Daniel and soon became a close friend as he started visiting and hanging out there when he wasn’t on the road. During lunch breaks, the three would brainstorm game ideas and work on development. To create a gaming experience everyone could enjoy, they decided to approach it from the story aspect. “Some of my closest friends aren’t gamers, but they enjoy stories. I wanted to get everyone around a table and tell epic stories together,” Daniel recalls.

In early development, they were working with the concept of a map that was unknown and mysterious until you played through it in the game. Needing a back story to build on, they suddenly realized one day that the map should be of the most mysterious island, El Dorado. It was a perfect fit, and so they began diving into the lore and history of El Dorado. According to Daniel, “it became a bit of an obsession!” And so, nearly all of the explorers in their game, The Island of El Dorado, are based off of people in history. One explorer that isn’t based on a historical figure is actually a nod to their very own Nick Tompkins: “Nick always seems to have terrible luck during his dice rolls. That’s why we named one explorer ‘Nicolas the Fortuitous’! In the rules, the phrase ‘Nicolas has an interesting relationship with luck’ was an inside joke to the same end,” Michael confesses happily.

Naturally, Daniel, Michael and Nick had a lot of fun working on their game. They played The Island of El Dorado A LOT, changing the rules and adding artwork because, as Nick admits, “as graphic designers we just couldn’t help it!” As the game evolved, the group discovered that making sure it was well-balanced was an important, and difficult, aspect of game design. As Michael puts it, “You’ll be working the game and discover a hole in the rules that breaks everything which can really freak you out. But you just keep plugging away until you find a fix. Break it, fix it, break it, fix it.” They also learned that you sometimes have to let go of something to make the game better and well-rounded. It’s the difference between making a game for yourself and making a game for everyone.

“Kill your ‘darlings’. If you get too attached to an idea, mechanic or storyline that isn’t in the game’s best interest at the end of the day, you’re just shooting yourself in the foot.” – Michael Howard

Eventually, the trio began playing The Island of El Dorado with other friends and relatives to test it and get feedback. Nick says, “The feedback has been the most important thing to the development of this game. There has been so much feedback, ideas, and support from everybody!” Their friends had so much fun playing their game that they figured there “must be something to it” and decided to take it to Kickstarter to expose it to more people and the gaming community, and raise funds to produce their gorgeous tabletop game.

Daniel, Michael and Nick had some PR and marketing experience, and used that to help make their Kickstarter campaign look great. But Daniel notes that they “had to learn the Kickstarter process from scratch. There is so much that goes into it!” It was a learning experience, and one that paid off. As Nick tells it, “Honestly, we took it to Kickstarter so that we could get a copy of the game for ourselves. The goal was to just break even on the project. We were blown away by the support of the gaming community.” Their campaign was fully funded in 20 hours, and went above and beyond their hopes and expectations. Daniel says he didn’t expect the response it got: “The community that showed up on Kickstarter was nothing short of incredible, and they made the game what it is today.”

So, they had accomplished what they set out to do: The game’s adaptable rule sets allowed the play experience to be tailored to the style of people at the table, and so there really is something for everyone with The Island of El Dorado! It’s the perfect gateway game to bring people into the genre of strategy games.

PlayMonster took notice of their Kickstarter success and soon a great partnership was formed. PlayMonster has the means to get their game into more retailers and make it available to more people, and Daniel, Michael and Nick have the experience and knowledge to help PlayMonster grow their strategy game line!

Daniel, Michael and Nick live in Oshkosh, Wisconsin, and still get together to hang out and play games. Daniel and his wife have two young boys, Michael and his wife enjoy life with their little girl, and Nick and his wife love relaxing with their two dogs. The three partners still work on expansion for The Island of El Dorado, along with other fun games, and remain connected with the Kickstarter and gaming community. The feedback and stories they receive are the true reward for the time and passion they put into their games.

“We receive a whole range of feedback, but one in particular has always stood out to me. A father messaged us and told us that he hadn’t hung out with his son in over six months, but since they had gotten The Island of El Dorado game they had been playing every night. They were finally spending time together. Doesn’t get much better than that!” – Daniel Aronson