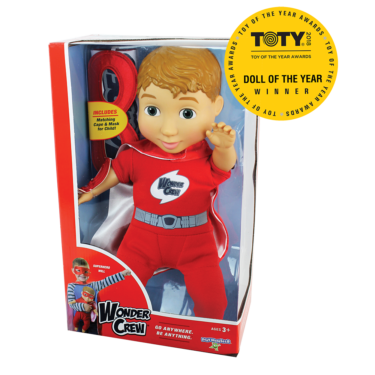 For the First Time, a Doll Created for Boys Wins Doll of the Year

March 7, 2018, BELOIT, Wis. – The toy world just became more inclusive, as Wonder Crew® from PlayMonster clinched a historic Doll of the Year Award. This marks the first time ever that a doll created specifically to address the developmental needs of the whole child – especially boys – has won the prestigious honor. The acknowledgement from The Toy Association’s recent Toy of the Year Awards (TOTY), was the second consecutive TOTY Award for PlayMonster, and topped an exciting week for the Beloit-based company.

Created by mom and psychotherapist, Laurel Wider, Wonder Crew is turning the table on the conversation about gender stereotypes and toys, which has largely been focused on giving girls more play options. After her son came home from preschool one day and announced that “boys aren’t supposed to cry,” Wider set out to create a toy that allows boys to connect emotionally.  What better way to help our young boys embrace their emotions than with a buddy that combines action and adventure with friendship and nurturing. The 15″ Wonder Crew buddies launched on Kickstarter and quickly drew praise from parents and media alike. Wider earned an invitation to the White House to speak, alongside industry giants like Mattel and Lego, during a conference on breaking stereotypes in media and toys. In 2016 PlayMonster aligned with Wonder Crew to bring this important toy to the world.

“It’s been incredibly humbling to stand side-by-side other nominees, but to win is beyond our wildest dreams,” said Wider. “A huge thanks to our fans and to PlayMonster for helping us send a new message to all kids, one that says yes, you can be kind, caring, nurturing, emotional and adventurous, strong, creative and more – a message that that moves beyond gender stereotypes and encourages all aspects of their identity. “

Part of the magic of Wonder Crew is that accessories are included for the child and doll to dress alike and go on adventures together. The crew, available now, includes four diverse buddies, Will, Marco, James and Erik, with each one dressed in superhero gear, complete with matching mask and cape for kids. Additional Adventure Packs are sold separately, and include outfits for the buddies and matching accessories for kids in themes of Builder, Explorer and Snuggler.

“It has been incredibly exciting to see parents and children respond to Wonder Crew, and such a rewarding year for our company, with PlayMonster earning six TOTY nominations for Automoblox, Ultra Dash, Mirari Juballees, Mirari Shellby, My Fairy Garden and Wonder Crew,” said Bob Wann, Chief PlayMonster. “This groundbreaking Doll of the Year win for Wonder Crew, despite the fact that a doll for boys has never been acknowledged, validates that toy makers need to think outside the toy box to give options for all kids to play, grow and learn. Our entire team is beyond proud of this accomplishment.”

PlayMonster received its first-ever win last year with Yeti in My Spaghetti® for Game of the Year. Previously, the company earned several TOTY finalist distinctions. PlayMonster was founded as Patch Products in 1985, and changed its branding and company name in 2016 to PlayMonster to better reflect the company’s continued commitment to provide high-quality classic play for all ages.

Often referred to as the “Oscars” of the toy industry, more than 600 toys and games were submitted for Toy of the Year Award consideration last fall by companies of all sizes; category finalists, announced in November, were selected by play experts, retailers, academics and journalists who sit on the TOTY judging committee. Category winners were selected based on votes from toy retailers, media, Toy Association members and consumers.