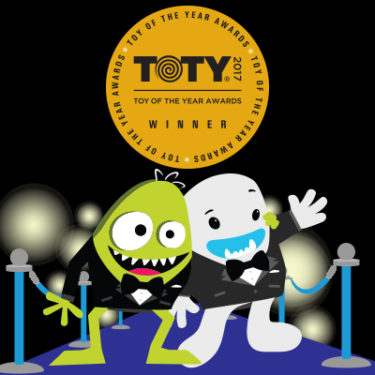 BELOIT, Wis. – The 114th North American International Toy Fair was a huge success for PlayMonster, the company whose portfolio includes a myriad of award-winning toys and games. They now have two more awards to add to their collection, as the company’s Yeti in My Spaghetti® received the toy industry’s most revered accolade, a TOTY (Toy of the Year) Award, and Director of Marketing, Lisa Wuennemann, was presented with the esteemed Women in Toys Wonder Woman Award.

Yeti in My Spaghetti was crowned Game of the Year at the TOTY Awards Ceremony at New York’s Intrepid Sea, Air & Space Museum on Friday, February 17, 2017. The event, often referred to as the “Oscars” of the toy industry,  kicked off Toy Fair Week, which took place at the Jacob K. Javits Convention Center February 18 through February 21, 2017.

The game, which involves keeping a Yeti suspended on a mound of spaghetti while players remove noodles one-by-one, was recognized for its innovation, design, product excellence and marketplace success; and it was chosen as a winner by elite members of the toy industry, including retail buyers, inventors/designers, academics, journalists, trade media spokespeople and bloggers.

“We were so excited that we set a company record this year with five TOTY nominations: My Fairy Garden,Automoblox, Perplexus Q-bot,Wonder Crew, and of course, Yeti in My Spaghetti,” said Bob Wann, Chief PlayMonster of PlayMonster. “Then to win the Game of the Year for Yeti in My Spaghetti… what a great way to kick-off the show! The entire PlayMonster team is beyond proud of this accomplishment.”

The celebration continued on Sunday, February 19th at the Women in Toys (WIT) 13th Annual Wonder Women Awards Gala, which salutes the industry’s top female change makers and pioneers. PlayMonster’s Director of Marketing, Lisa Wuennemann received the Wonder Woman Award for excellence in Marketing for her talents and expertise in bringing PlayMonster’s products successfully to market.

“It is immensely gratifying to be recognized by the industry and to receive this distinguished award,” said Lisa Wuennemann. “The 12 nominees in the marketing category were all dynamic women from established, successful companies, and to be a nominee among them was in itself, a true win.”

The event was held at Pier Sixty at Chelsea Piers in New York and was attended by more than 600 executives in toys, licensing and entertainment. Individuals were nominated for a Wonder Woman Award by industry peers in the following categories: Entertainment, Licensing, Manufacturing, Marketing, Rising Star, Lifetime Achievement and Change Maker; and winners were determined by WIT members, Board of Directors, Advisory Board, and key industry influencers.