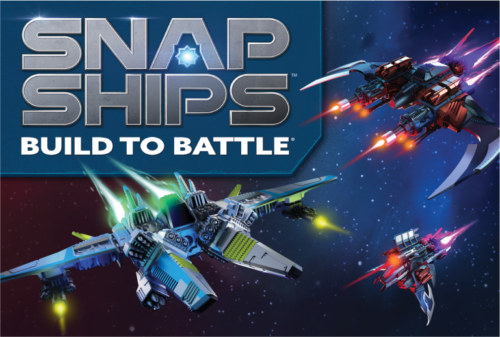 The Innovative Line is the First of its Kind to Incorporate a Building System with Action Play, and is Supported by an Epic Storyline, Multi-Million Dollar Marketing Campaign and Complementary AR App

BELOIT, Wis. (July 6, 2020) — Welcome to the future, where the world is under constant attack from a brutal alien threat. Are YOU ready to BUILD TO BATTLE?!  The fate of the universe lies in your hands!

PlayMonster, the Big on Fun company, is pleased to announce the highly anticipated launch of its new line of building toys, Snap Ships™—a collectible, durable and versatile modular building system that stands up to action play. Snap Ships invite kids to build, battle and display an exciting array of cool spacecrafts, merging two of the biggest play patterns for boys—action-play and construction.

Designed for kids ages 8 and up, the exciting new Snap Ships fleet launches with eleven ships at a suggested retail price of $9.99–$39.99, each coming with a mysterious UJU tech piece that holds special value hidden inside the box. Snap Ships come with multiple build options and are available today in early release on Amazon and will hit shelves at Target and other retailers later this month.

“Snap Ships is so much more than a great toy line; it is a content-driven franchise that allows kids to not only build, but also play, battle, rebuild, customize, watch content, engage with the app and then do it all over again,” said Tim Kilpin, PlayMonster’s newly appointed President. “We set out to change the building play experience, and it is the biggest launch in Play Monster’s history.”

To tell the epic story of the Snap Ships universe, PlayMonster needed a partner as powerful as the best in its fleet, and has joined forces with award-winning content studio Wind Sun Sky to produce a fast-paced and edgy animated series. Season one of the series, Snap Ships Dawn of Battle will launch this August on YouTube, with new episodes releasing each week.

“We knew right away that we wanted to be a part of Snap Ships because of its all-around potential,” said Winder, “We’re excited to partner with PlayMonster, one of the fastest growing toy companies in the industry, to bring the Snap Ships story to life through creative content.”

The vast storyline introduces viewers to The Forge, an elite team assembled to pilot a fleet of versatile and specialized Snap Ships defense attack craft, and The Komplex, an alien species determined to annihilate all life, that has invaded with no warning. Along the way, The Forge discovers mysterious UJU tech, left behind by an ancient civilization, that can be added to their Snap Ships to give them unheard-of abilities.

Rounding out the Snap Ships launch is the release of the free interactive Snap Ships app, designed to complement the toy line and animated series, allowing users to explore the vibrant world of Snap Ships. Highly detailed digital versions of the constructible toys come to life in the app and can be summoned into your room via Augmented Reality. Kids are invited to “Build to Battle” with digital building instructions for the core Snap Ships kits, as well as a huge assortment of custom ships unique to the app. Track your collection, prep ships for flight in AR, and test fire your ship’s weapons as you battle against the ever advancing Komplex.

Developed by Scott Pease and Jeff Swenty, AAA video game veterans (Tony Hawk, Guitar Hero, Call of Duty) and the inventors of Snap Ships, the app, rated E for everyone, is available now for free for iOS on the Apple App Store and for Android via the Google Play Store.

“To us, Snap Ships are more than toys—we imagine them as real, working spaceships,” said Pease. “The Snap Ships app brings that fantasy to life: summon life sized ships in Augmented Reality, walk around them, test their weapons, and fly them into Battle. You also get access to an endless supply of unique ships with detailed, 3D building instructions, so you can build them all with your real-life toy kits!”

PlayMonster, a leading international toy and game company, believes in the power of play to make a positive difference in people’s lives, and strives to keep play alive for all ages by delivering great play value through designing, manufacturing and marketing innovative and fun toys, games and activities. PlayMonster’s diversified portfolio includes popular brands and products such as “TOTY Game of the Year” Yeti in My Spaghetti®, plus The Game of THINGS…®, 5 Second Rule®, Relative Insanity®, Farkle, SET®, Five Crowns®, Spirograph, Colorforms, My Fairy Garden®, Face Paintoos™, Fashion Plates®, Y’Art®, Latchkits®, and Snap Ships™.

Scott Pease and Jeff Swenty are the inventors and founders of Snap Ships LLC. They are also AAA video game veterans, having guided some of the biggest video game franchises in history: Scott led the development of the original Tony Hawk’s Pro Skater franchise first as a producer, and later as a Studio Head of Neversoft, an Activision studio. Jeff joined Neversoft in 2005 and helped Scott and the team ship the action game Gun, seven Guitar Hero games, and one entry into the Call of Duty franchise. In all, Neversoft worked on three distinct billion dollar franchises and shipped over 100 million video game units worldwide. Snap Ships LLC is dedicated to developing original, creative, and long-lasting toy and game IP that can expand across all mediums. The Snap Ships app can be found at app.snapships.com.