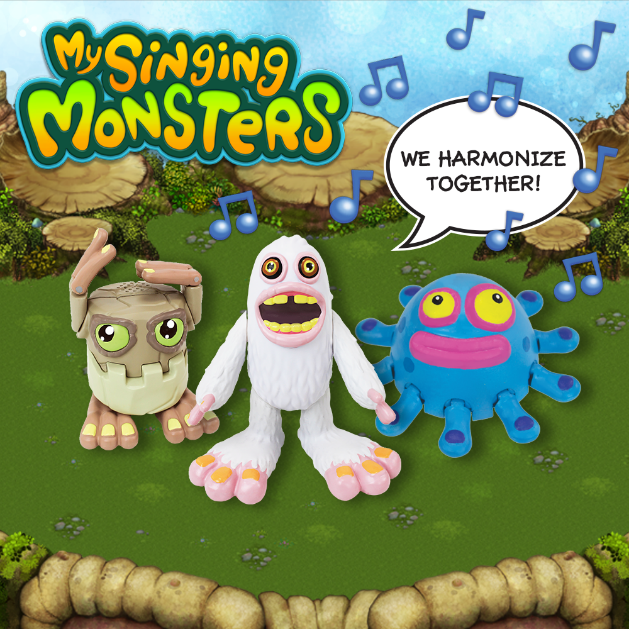 BELOIT, Wis. (August 22, 2019) —My Singing Monsters, the mobile game that‘s captivated millions around the world, will be harmonizing in homes later this fall with new collectible figures!

Since 2012, over 80 million people worldwide have downloaded Big Blue Bubble’s popular My Singing Monsters game. Wind Sun Sky Entertainment is leading the My Singing Monsters franchise expansion, partnering with PlayMonster to further build on this worldwide phenomenon. Audiences will have an opportunity to bring the music home with figures that use never-before-seen technology to harmonize and sing in-sync with each other and recreate the beloved Plant Island song featured in the game. PlayMonster has created an adorable collection of six adult Monsters and eight Baby collectibles. Plus, just like in the mobile game, the more Monsters you collect, the fuller the song becomes.

After receiving a tremendous response from members of the press, digital influencers, and My Singing Monsters fans alike at The Toy Insider’s legendary Sweet Suite 2019 event, the collectibles are making their monstrous debut with limited quantities hitting pre-sales on Amazon.com today. This is music to the ears of the legions of faithful My Singing Monsters fans as they will now have a new and exciting way to engage with their favorite characters.

Fall 2019’s launch will begin with familiar faces like Noggin, Toe Jammer, Mammott, Maw, Furcorn and Entbrat. Each Monster in this first series comes with an accessory that the character likes in the game, as well as an exclusive code for an in-game reward. There is also a special collector pack available, which includes three of everyone’s favorite Monsters: Toe Jammer, Mammott and Noggin. The Baby Monsters each come with their own unique “egg” that they fit inside.

“We fell in love with My Singing Monsters from the moment we saw them — we are very excited to be adding this license to our roster,” said Scott Flynn, VP Sales & Marketing of PlayMonster. “The immense success of the mobile game showed us how important it was for us to stay true to the game which is why we made sure these collectibles feature harmonizing technology to create the signature Plant Island Song for a seamless online/offline experience.”

“PlayMonster has brought their passion as an innovative toy company to develop the most compelling music-based figures in the market today. We couldn’t be more excited to share these toys with our current and future fans.” added Catherine Winder, CEO at Wind Sun Sky Entertainment.

“We are really excited to be partnering with PlayMonster,” said Bryan Davis, SVP, Business Development at Big Blue Bubble. “Their playful work ethic embodies what Big Blue Bubble and My Singing Monsters hopes to bring to all of its’ fans worldwide. We are excited to start this journey with such an amazing brand!”