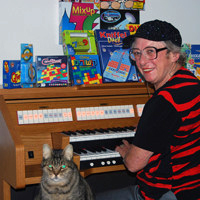 Maureen Hiron is a woman of many talents, and a woman who lives a very active and diverse life. Her career began in education—she was a games mistress (head of the physical department) at a large London comprehensive school—until she was pensioned off from teaching when she was injured in an accident where part of the school fell on her head, at the ripe old age of 32.

Maureen’s future was unknown—she couldn’t teach, and her head injury left some damage—and she wasn’t sure what to do with her life, but she didn’t give up. Maureen decided to devote her time to playing bridge, as she was an expert player and hoped the mental exercises of playing would help penetrate the cloud that enshrouded her damaged brain. Fortunately, something great happened…Maureen’s brain began to work in an incredible way, allowing her to be able to reason with the intuitive mind of a child, yet still retain her knowledge and high IQ level!

Maureen’s new talent and passion has fueled her conception and design of over 70 games published around the world, in over 50 countries! A few of her recent games—Grabolo, 7 ATE 9, Qwitch—are manufactured by PlayMonster as a family-friendly line of card games. Maureen’s unique ability to create a game that can be enjoyed across generations is the secret behind many of her games’ successes.

As she continues to develop new games, Maureen also remains devoted to playing bridge, having represented England and Britain in tournaments around the world. She and her late husband also wrote several best-selling books together, and she has also worked on several TV shows, was the bridge columnist for two national newspapers in England, and writes bridge columns weekly for an Irish daily newspaper. Most recently, Maureen has taught herself to play the concert organ and compose music. She made friends with musician Sheyla Bonnick of Boney M while on a cruise, and the two have since released an album together, titled Look Beyond.

Even though Maureen was forced to change her life direction at a young age, she never lost her spirit, and is leading a very full and interesting life because of that. The world is lucky to be able to enjoy her talents, sharing that brilliance with friends and family through game play.