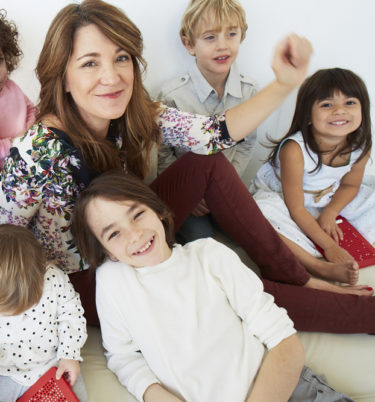 “Children are the most inventive, humorous, eccentric creatures on the planet.”

As founder of Kid O Toys, Lisa Mahar spent every day working to cultivate these qualities, which are natural in all kids. Kid O Toys are informed by research into childhood development as well as Lisa’s professional training in architecture, which gave her a versatile, interdisciplinary skill set required to work in a wide range of creative disciplines, including graphic design, photography, and industrial design.

When she began her career as an architect, Lisa never imagined that it would lead her to start a successful toy company. But when she became a mother, Lisa discovered that she wanted to learn more about how children thought, played, and developed. So she created a job for herself to answer those questions, and Kid O was born soon after her first son.

Before it was a toy company, Kid O was a toy store in New York City’s West Village. The retail location specialized in products that encouraged kids to be creative, confident, and independent. Lisa developed the store’s minimalist interior in defiance of the idea that children are maximalists at heart. The store’s concept proved a success, and in 2008 it was recognized by New York Magazine as the “Best Toy Store in New York.”

As a mother and store owner, Lisa realized how hard it was to find intelligent, well-designed toys that were also affordable. So she decided to make her own, beginning with the Magnatab. The first Magnatab (Uppercase A-Z) was made for her five-year-old son, who had been struggling with writing and reading in school. Lisa observed that her son was only using written worksheets to trace the letters and realized that simply wasn’t engaging him enough. Inspired by educational philosophies developed by Maria Montessori-a leader in children’s education-Lisa developed a multi-sensory magnetic tablet that has tactile, auditory and visual cues to help solidify learning. The Magnatab was revolutionary in that it taught all kinds of learners to write in a natural and engaging way. In 2008, Kid O produced its first product line, which included the Magnatab, their best selling product to date.

As technology became ubiquitous in our lives-and in the toy aisle- Lisa challenged herself to incorporate new technologies into her toys while staying consistent with her belief that when children’s play is powered by their own imaginations, they’ll develop skills that will last for a lifetime. Her solution was the Myland line, a series of toys that incorporate some technological elements without limiting possibilities for open-ended, creative play. Like other Kid O products, the Myland aesthetic reflects Lisa’s background in design and architecture and places an emphasis on simplicity, craft, and modern design.

In 2018, Kid O was acquired by the toy company PlayMonster. Lisa is excited for the next step in Kid O’s journey and says, “My first son’s natural curiosity sparked my imagination and inspired Kid O. I think becoming a mom made me a better designer, and being a designer made me a better mom. Embracing both roles led me to create toys that encouraged the natural inventiveness, humor, and discovery I saw in my son every day. 14 years later, I am delighted PlayMonster will continue Kid O’s mission to help kids make sense of the world around them.”