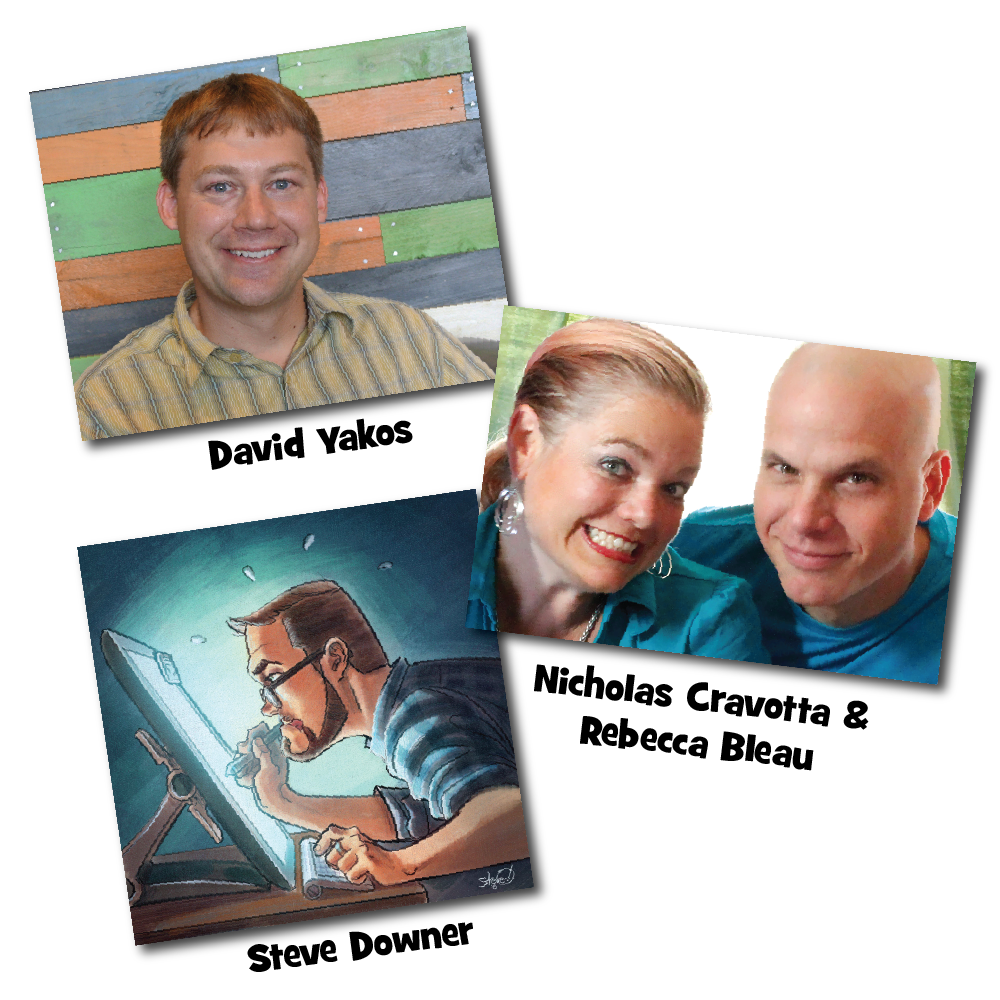 At a table in a New York Indian-restaurant, three people schemed their masterplan…the plan to—Break In!

Toy engineer David Yakos, and husband and wife game-designers Nick Cravotta and Rebecca Bleau first met at the New York Toy Fair and became fast friends. Their relationship blossomed as they reminisced about their various adventures in the toy industry. The trio quickly realized they could combine their minds to create a new type of board game. However, they still didn’t know exactly what that game would be.

Around that time, another form of entertainment was booming in popularity: escape rooms. After playing through some escape rooms, David fell in love with the concept and realized he wanted to find a way to bring the escape experience into living rooms. But he ran into a problem, how could someone escape from a tiny box?  Then, inspiration struck! Since you can’t fit inside the box to escape, it’s better to Break In!

David constructed a 3-dimensional layered-escape concept box and shared it with his partner inventors. Nick and Rebecca loved the idea and began crafting a background story to go along with it.

Nick and Rebecca grabbed from their extensive creative backgrounds to craft compelling narratives to go along with the breakout escape box concept. As a child, Rebecca was inspired by the Choose Your Own Adventure book series, so she wanted to incorporate multiple scenarios and endings into the Break In games. Rather than a single finale like most board games, they wanted players to find a variety of outcomes.

David is a huge fan of adventure movies like Indiana Jones and Tomb Raider. Working with Nick, they decided to incorporate the feelings of mystery and excitement that those movies offer. Because Break In would be an extremely interactive medium, Nick drew from his past experiences writing murder-mystery dinner experiences. His plan was to combine the feeling of adventure movies with the exciting twists and turns of a mystery dinner.

When the core ideas were fleshed out, the trio had to choose a setting for their game. Since they were all well-traveled, they looked at some of their favorite places. Their goal was to recreate some of the most fascinating places on Earth right in a player’s living room! After some discussion, it was decided that their first Break In game would be set in the famous Alcatraz prison and follow the story and setting of the only successful escape attempt, set in 1962.

With a rousing narrative, great gameplay, and an adventurous location, the inventors needed an artist to tie all these aspects together. They called on DC Comics artist Steve Downer to create the art. Steve had experience working on titles like Superman and Wonder Woman, and his unique style was a welcome addition to the team.

With all the necessary components in place, the Break In concept was ready! David, Nick and Rebecca had made their idea an exciting reality! Now people can Break In to some iconic places right in their living rooms!