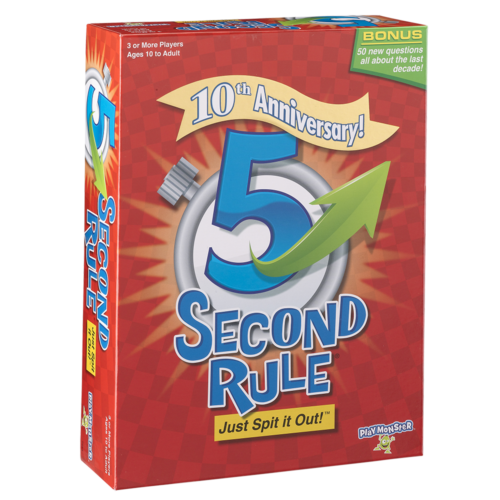 BELOIT (Wis.) October 28, 2020 – The renowned party game, 5 Second Rule, is celebrating its 10th anniversary in 2020. The popular game, which has been played by celebrities on The Ellen DeGeneres Show for six years, has sold millions of copies in more than 50 countries. To celebrate, PlayMonster is releasing an exclusive 10th Anniversary Edition featuring 50 new cards related to topics and happenings in the last decade such as “Name 3 streaming services” and “Name 3 social challenges.”

You think it would be easy to name 3 things but imagine doing it under the pressure of a 5 second countdown! That’s exactly what Michael Sistrunk discovered over a decade ago when he first created 5 Second Rule. In this game, time is not on your side, so just say what comes to mind and risk ridiculous answers slipping out as time twirls down on the unique twisted timer! The game offers a wide variety of topics from “Name 3 breeds of dogs” to “Name 3 spices” to “Name 3 things in your nightstand” which makes it appeal to everyone.

“The beauty of this game is that most people know the answers—there’s no studying required, no doctorate-level education needed,” says Sistrunk. “The timing is what will get you tongue-tied, and everyone’s on level playing ground…to start.”

5 Second Rule is perfect for game night because kids, teens, parents and grandparents can all play together. Best of all, there are three versions of the game to choose from: Junior, Family and Adult.

To celebrate 5 Second Rule’s anniversary, PlayMonster and Ellen Digital Ventures have joined forces to celebrate the 10th anniversary with a contest. In an OMKalen episode, viewers are challenged to submit their best 5 Second Holiday Glow Up on EllenTube for a chance to win a virtual seat to one of “Ellen’s 12 Days of Giveaways”! The 5 Second Holiday Glow Up contest launched on October 23rd and will run through November 6.

For more information about 5 Second Rule and the 5 Second Holiday Glow Up contest, please visit PlayMonster.com

To watch the best of celebrities playing 5 Second Rule on The Ellen DeGeneres Show, visit https://www.youtube.com/watch?v=Mwgk8S2XBWo