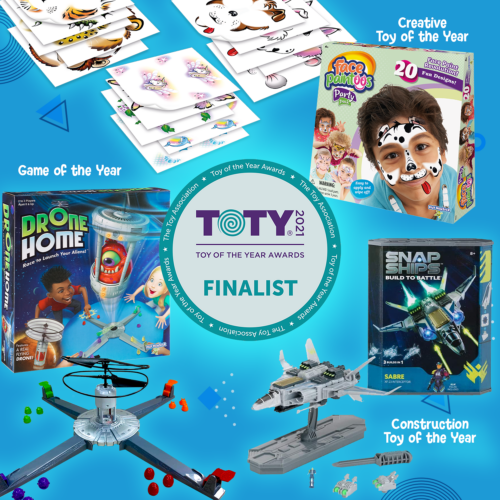 The TOTY Awards, administered by The Toy Association, are frequently referred to as the “Oscars” of the toy industry, and finalists are announced from a field of hundreds of nominations. Finalists are determined by elite members of the toy industry, including retail buyers, industry influencers, academics, media, and more. For more information about PlayMonster’s TOTY Award finalists, and to vote, visit playmonstervote.com.

The TOTY announcements continue what has been a momentous year for PlayMonster. Snap Ships Gladius was named on The Toy Insider’s Holiday Gift Guide Hot 20 list and Best New Toy Award for 2020 from Fatherly, plus Drone Home was listed on Amazon’s Toys We Love Top 25 List, named a top holiday toy by TTPM, won a 2020 National Parenting Product Award (NAPPA) and is featured on The Toy Insiders Holiday Gift Guide. Additionally, PlayMonster products and their inventors were named finalists for three Toy & Game International Excellence Awards (TAGIEs) for: Game Innovator of the Year for Drone Home, Rising Star Innovator of the Year for Snap Ships and Innovative Art And Visuals of the Year  for Break In.

“We are honored and excited to have been selected as finalists in three 2021 TOTY categories,” said Bob Wann, Chief PlayMonster of PlayMonster LLC. “2020 has been a very important year for PlayMonster and being named a finalist is an indication of the hard work and determination of our entire team. We are thrilled to be recognized as the gold standard in toys by the industry and consumers alike.”

“Thanks to the expertise of our expert panel of judges, this year’s TOTY finalists embody all the best aspects of play – fun, discovery, and product innovation,” said Ken Seiter, Executive Vice President of Marketing Communications at The Toy Association. “From games that put a new spin on classic play to toys offering new play patterns that speak to today’s generation of kids, we are excited to reveal these finalists. Don’t forget to cast your votes to help determine the winners!”

Winners will be announced at an exciting TOTY Awards virtual event on February 12, 2021, which will also include the induction of toy industry trailblazers into the esteemed Toy Industry Hall of Fame and serves a vital fundraiser for The Toy Foundation. One winner in each category, as well as the coveted “Toy of the Year” award winner and the “People’s Choice” winner (based solely on consumer votes), will  have their names called in what promises to be the most exciting TOTY Awards yet.

About The Toy Association

www.toyassociation.org / www.thegeniusofplay.org / www.playsafe.org
Founded in 1916, The Toy Association™, Inc. is the not-for-profit trade association representing all businesses involved in creating and delivering toys and youth entertainment products for kids of all ages. The Toy Association leads the health and growth of the U.S. toy industry, which has an annual U.S. economic impact of $107.5 billion, and its 950+ members drive the annual $26.5 billion U.S. domestic toy market. The Toy Association serves as the industry’s voice on the developmental benefits of play, and promotes play’s positive impact on childhood development to consumers and media. The organization has a long history of leadership in toy safety, having helped develop the first comprehensive toy safety standard more than 40 years ago, and remains committed to working with medical experts, government, consumers, and industry on ongoing programs to ensure safe and fun play.

About the Toy of the Year Awards (TOTY)

www.toyawards.org
The Toy of the Year Awards, known as the “Oscars” of the toy industry, annually recognize the top toys and games on the market. Finalists are nominated from within the industry and selected by a panel of expert judges. Winners are decided by votes cast by the public (at ToyAwards.org) and members of the industry. The TOTY Awards are administered by The Toy Association, with 100% of the program’s proceeds benefiting The Toy Foundation and its goal of delivering millions of brand-new toys to children in vulnerable situations.