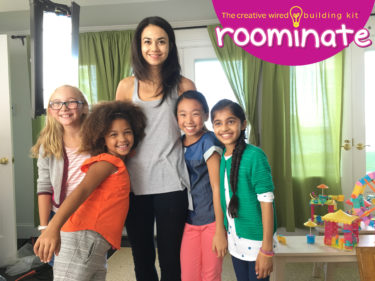 Roominate was designed to inspire girls to build, and gained widespread recognition and popularity when Brooks and her partner landed a deal with Mark Cuban on “Shark Tank.” PlayMonster has since acquired Roominate, bolstering Brooks’ resources to further innovate Roominate’s award-winning building sets.

Brooks adds the TAGIE to a growing list of awards and recognitions including being named in Forbes 2015 “30 Under 30” list and Forbes 2016 “30 under 30 All-Star Alumni” list. This past summer she was invited to attend the White House conference “Breaking Down Gender Stereotypes in Media and Toys,” and asked to be a member of a panel at the 2016 Forbes Women’s Summit, “The Lives You Impact: The Role of Culture in Educating and Empowering Tomorrow’s Leaders.”  Brooks holds a B.S. in Mechanical Engineering from MIT, a Masters in Mechanical Engineering from Stanford. She started Roominate with one simple mission-open up possibilities for girls by showing them that creativity and engineering are fun.

“We’re thrilled Alice has been recognized by yet another industry powerhouse,” said Bob Wann, Chief PlayMonster of PlayMonster. “Since Roominate has become part of our portfolio, Alice has worked hand-in-hand to continually innovate the designs and playsets. Her commitment to bring fun STEM sets to girls is unwavering and she is very much deserving of this honor.”

Roominate has been praised by parents, toy industry insiders and gender advocates alike. This fall PlayMonster is rolling out six new building sets featuring increased motor power, unique building pieces and more play-friendly dolls.  With the sets, girls can build the creations shown, or use their imagination to create their dream project! It’s fun to use sets to “Switch on Your Imagination!”

The Roominate line has garnered top awards including one of the this year’s top STEM toys by The Toy Insider, Forbes “Top 10 Toys to Watch in 2015,” TIME “Toy of the Year,” a 2015 and 2016 TOTY Finalist and many more.

PlayMonster is a toy and game company that believes in the power of play to make a positive difference in people’s lives. Delivering great play value by designing, manufacturing and marketing quality products like the award-winning The Game of THINGS…®, 5 Second Rule®, Mirari®, Perplexus®, Don’t Rock the BoatTM, Farkle, Chrono Bomb®, OK to Wake!®, Lauri®, Stratego®, Roominate® and Wooly Willy® is how PlayMonster helps keep play alive for all ages.