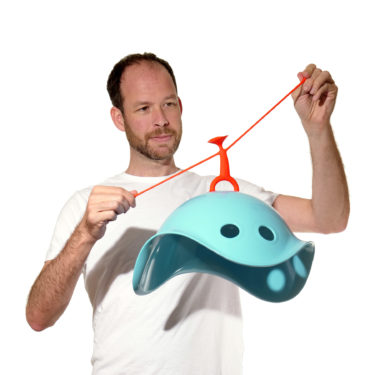 Alex Hochstrasser, founder of the Swiss toy company MOLUK and designer and inventor of the TOTY award-winning Bilibo, draws his inspiration for the toys he creates from many different places. He loves traveling and exploring the world around him, observing how people and children interact with toys and everyday objects. Memories from his own childhood also play a role in what he works on, as he says, “I basically design the toys I would have loved myself when I was a kid!”

Growing up, Alex loved playing with construction toys such as Lego (never using the instructions!), but his strongest memories are of playing with other kids outdoors in the forest or at the river. There, they would use their imaginations, fascinated with the inherent play value of mundane objects like sticks, rocks or cardboard boxes-those simple objects proving most useful in their games. Today, those experiences are an important factor in the development of MOLUK’s sustainable toys that don’t just entertain, but invite real interaction.

Alex graduated from the University of Art and Design in Zurich, where he studied Industrial Design and spent time working abroad with different design firms and manufacturers in New York, San Francisco, Barcelona and Tokyo. His decision to focus on designing toys came later, when as a godfather he became frustrated by the lack of innovative toys when shopping for his godchildren. The toys he saw in stores, to him, were too gender-specific, too dated, or had a very short lifespan. He felt it was important to gift children with toys that work regardless of age and gender, and that tapped into the natural curiosity of children and their urge to play and explore.

After much research and hard work, Bilibo became Alex’s first toy, and it’s still widely regarded as one of the most innovative and versatile open-ended toys on the market. Its large iconic shell shape arouses curiosity and engages children’s imaginations in a playful way. When children see Bilibo, they see possibilities-it’s a seat to rock and spin in, a giant turtle shell, a water play vessel, a toy box, a stepping stool, a hill or tunnel for toy trains, and so much more. Alex muses, “I’m constantly surprised to see the new things kids come up with when they play!”

Interestingly, with many MOLUK toys, the majority of adults just don’t “get them.” An ambiguous toy confuses them, because they’ve lost the ability to imagine how children look at the world. Adults are used to a world where everything must have a clear function and purpose; strict rules are the norm. Fortunately, children are much more at ease with blending reality and imagination into their storylines when they play. Open-ended play stimulates children’s senses and minds and helps them develop many basic skills. Toys like Bilibo are essential in our technological world.

Alex, along with his sister, continues to successfully develop, design and manufacture MOLUK toys and has expanded into other fun-named toys like Oogi, Plu?, Mox and more. Alex touches nearly every aspect of the process-from concept to design to marketing. He says, “For me, the creation of a toy, its name, packaging and presentation through photo and video are equally challenging and exciting.” And he is thankful for the opportunity to run his own company and have the freedom to pursue his vision for toys and focus on projects that he finds meaningful and fun!

It’s also fun to note that Alex loves playing with his own designs, pushing the open-ended play to a whole new level when he finds creative uses for his toys, such as using Bilibos as punch bowls at his parties! Cheers!