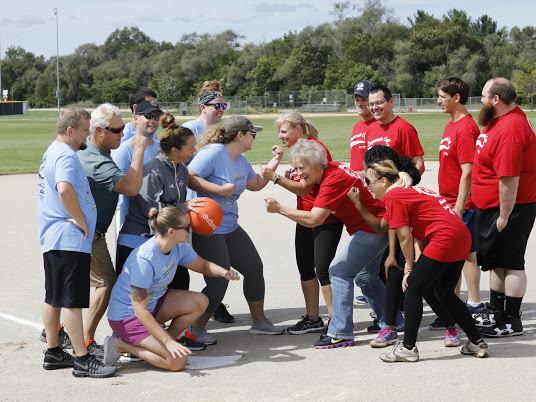 BELOIT – The Stateline Family YMCA’s first Corporate Cup event was a big success, attracting hundreds of participants and more than a dozen companies.

The event raised more than $20,000 for the Strong Kids Campaign, which helps fund swim lessons, camp and other programs for youth, according to Stateline Family YMCA Roscoe Branch Manager Ann Matuska.

Teams were given points for participation as well as placement. There were three divisions based on the number of employees at each company.

Stateline Family YMCA Director of Operations Ann Hankins said the event was designed to get corporations and coworkers working together, having fun, connecting with others and using different recreation options in the city.

Matuska said Corporate Cup has been about supporting the Strong Kids Campaign, being involved in the community and also about team bonding and camaraderie within an organization.

“I was very happy the way the community stepped up and contributed to the first Corporate Cup,” Matuska added.

She said businesses such as the Hog Cabin, Viking Lanes, The Rock Bar and Grill and Ironworks Golf Lab allowed the Corporate Cup to use venues for free and often provided staff to help facilitate the events.

Matuska said every company had to supply some volunteers to help facilitate events in addition to participating in them.

Matuska said she was grateful for the overwhelming support of the event.

“We are extremely thankful to the companies participating as well as the businesses that have hosted an event, my committee and all the volunteers,” Matuska said. “By all accounts, it has gone as smoothly as one can hope for during the first year. The community has been wonderful. Participants had the perfect amount of fun, but still were competitive.”

Perhaps the best part of the Corporate Cup is the proceeds which will fund the Strong Kids Campaign.

“At the YMCA we do not want to turn anyone away for inability to pay. We want to provide that safe place for kids and young families to come to even if they can’t afford it,” Matuska said.

Matuska said the event is hoped to become an annual one. Participants could join in one event or all of them. Companies wanting more information on joining future event can email her at amatuska@statelineymca.org.