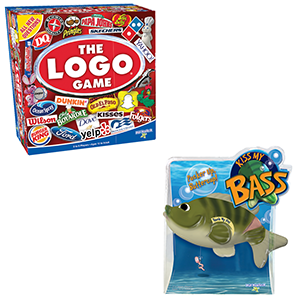 Players Will Have a Blast with Pop Culture Trivia and Cheeky Humor!

BELOIT, Wis. (February 6, 2019) — Keep the party going strong with all new PlayMonster games! Game night fun just gets better with The Logo Game’s® trivia about America’s favorite brands, and the hilarious attitude of Kiss My Bass™–Pucker up, buttercup! The new games will be revealed during North American International Toy Fair in New York, February 16 – 19 at booth #435.

The Logo Game joins PlayMonster’s award-winning party game line for 2019. The game was a top-seller for years, and PlayMonster recently gained the license and is excited to release a new version of the game. The Logo Game will have all new content featuring new and nostalgic brands, and players will have fun with trivia about popular logos, commercials, facts and more! Plus, the new version features 3D pewter pawns of fun items and characters! For 2 to 6 players ages 12 to adult, this game is available Fall 2019.

On the other end of the spectrum comes a sarcastic fish that’ll tell you to “Kiss My Bass!” This game, which could also be an amusing novelty gift, features a 3D electronic talking fish that dares/tells players to touch him in certain areas (touch points) and responds whether the player does it correctly or not—he’s not happy if you don’t do as he says! Players take turns touching his fin, back, etc. or kissing his lips or his…ahem…”bass.” If he farts on a player during a smooch, that player is out! A hilarious game for two or more players, ages 10 to adult, Kiss My Bass will land on shelves in Fall 2019.