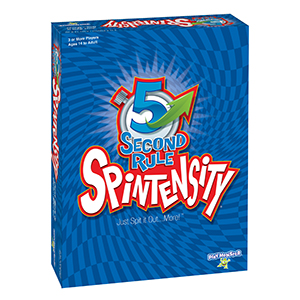 BELOIT, Wis. (January 28, 2019) — Just Spit it Out…More!™ 5 Second Rule® has been a hot party game in the PlayMonster line for nearly 10 years, growing even more popular in recent years with its appearance on the Ellen Degeneres show, being played by celebrities! And now 5 Second Rule has a new, intense addition to its line of Junior and Uncensored versions, with Spintensity™ adding more time and a new spinner that shakes things up! The new game will be revealed during North American International Toy Fair in New York, February 16 – 19 at booth #435.

5 Second Rule is simple—name three things in five seconds—and hilarity comes to play when people get tongue-tied and freeze or give crazy answers under pressure! 5 Second Rule Spintensity keeps this basic game play and adds to it! The all-new timer is now random—maybe it’ll stop after 30 seconds, or maybe 45…you never know. And once you have named three answers in five seconds, you have to hurry and spin the spinner. The almighty spinner will then have you do one of three things: Name two more answers to that same card, draw a new card and name three new answers, or pass to the next player. You have to stay on your toes and hurry so you can win cards and not lose out if the timer stops during your turn! 5 Second Rule Spintensity is a “spintense” game for three or more players, ages 14 to adult, and lands on shelves in Fall 2019.

About PlayMonster LLC
Beloit, WI-based PlayMonster is a toy and game company that believes in the power of play to make a positive difference in people’s lives. Delivering great play value by designing, manufacturing and marketing innovative, fun products such as “TOTY Game of the Year” Yeti in My Spaghetti® and “TOTY Doll of the Year” Wonder Crew®, along with other award-winning toys and games like The Game of THINGS…®, 5 Second Rule®, Relative Insanity®, Mirari®, Farkle, OK to Wake!®, My Fairy Garden®, Automoblox®, Marbleocity®, Kid O® and Super Spinner® is how PlayMonster helps keep play alive for all ages.