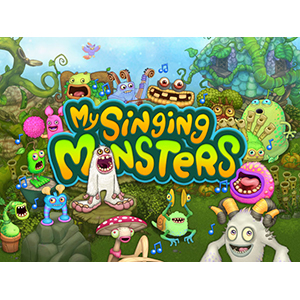 BELOIT, Wis. (January 28, 2019) — PlayMonster LLC has joined forces with Wind Sun Sky, in partnership with Skybound Entertainment and Big Blue Bubble, as master toy license in North America for the top-grossing mobile game My Singing Monsters. PlayMonster plans a multi-year program for figures, playsets, games and accessories. The first wave of this program, a line of collectible harmonizing figures and accessories, will be unveiled during North American International Toy Fair in New York, February 16 – 19 at booth #435.

In My Singing Monsters, players young and old add monsters to their islands to create songs. Each monster has its own personality and part in the song, so the song changes as more monsters are added. Along the way, players feed and breed their monsters, and add structures for hours of fun. The game has 80+ million players worldwide, with one million players added monthly, plus 410+ million YouTube views. Fans are ready to see the game and its characters come to life, and PlayMonster agrees:

“Partnering with Wind Sun Sky is an ideal collaboration for us,” said Scott Flynn, VP of Sales & Marketing at PlayMonster. “My Singing Monsters is all about the unique personalities of the monsters, creative islands and scenery, and fun music. Players are very engaged when they play the game, and all of this will translate really well into toys. It’s definitely an exciting opportunity for PlayMonster!”

For 2019, PlayMonster will launch the My Singing Monster Harmonizing Collectibles in July. The popular Plant Island monsters Entbrat, Furcorn, Toe Jammer, Mammott, Noggin and Maw will be articulate 3D figures that sing on their own, and harmonize together when multiple are collected. Each monster is sold separately, and comes with one of its favorite accessories from the mobile game. More monsters are planned to follow in early 2020.

Also debuting in 2019 will be the My Singing Monster Babies, which are baby versions of the popular monsters. Each baby monster comes inside its unique and colorful egg and make adorable collectibles. PlayMonster plans to release eight babies per year.

About My Singing Monsters:

My Singing Monsters is a beloved and critically acclaimed top-grossing game on the App Store and Google Play, with more than 80 million players worldwide. The free-to-play family-friendly title explores rich intriguing worlds as players are engaged in discovery, creativity, and delight by breeding and feeding Singing Monsters to build unique melodies. Each monster has its own unique sound, so players can mix and match monsters to create different melodies.

Wind Sun Sky Entertainment is a Vancouver-based and Canadian controlled multimedia entertainment company. The studio is led and controlled by former LucasFilm executive, Catherine Winder (The Angry Birds Movie, Star Wars; The Clone Wars). Based in Vancouver, Wind Sun Sky Entertainment is a full-service producer of creator driven mulit-platform content with a focus on developing Canadian content for the domestic, U.S. and international marketplace. The film-makers behind such notable projects as The Walking Dead, Fear the Walking Dead, and Outcast, Robert Kirkman and David Alpert, are minority partners in the venture along with entrepreneur Jon Goldman (Greycroft Partners LLC).

Skybound Entertainment is responsible for television hits including The Walking Dead, Fear the Walking Dead, Outcast, Robert Kirkman’s Secret History of Comics, and currently holds a first-look television deal with Amazon Studios. On the film side, Skybound has a first-look deal with Universal. Robert Kirkman’s second-longest running comic series Invincible will be developed for film at Universal and as an animated series for Amazon. The interactive gaming slate includes partnerships with Telltale, Starbreeze, Skydance, Scopely, and more. Skybound is currently publishing comic book titles The Walking Dead, Oblivion Song, Die!Die!Die!, Outcast, Redneck, Gasolina, Crude, and more.