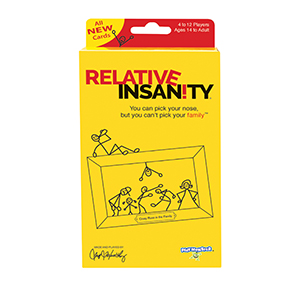 BELOIT, Wis. (January 28, 2019) — When PlayMonster launched comedian Jeff Foxworthy’s hilarious game Relative Insanity at last year’s Toy Fair, it was the beginning of a very successful game line. Because it’s such a hit, and fans and players are begging for more hilarious content, Foxworthy wrote more material about crazy families and PlayMonster developed a smaller stand-alone game that can also be added to the original. The game will be revealed during North American International Toy Fair in New York, February 16 – 19 at booth #435.

Game play is the same as the original game fans love, allowing player to mix and match bits of Foxworthy’s comedy that creates wacky situations about family. Everyone has a crazy friend or family member (or two or three…) and can totally relate to this game’s hilarious situations and humor!

In Relative Insanity, one player will read a setup card, such as “When the customs agent asked my mother if she had anything to declare, she blurted out…” and the other players will decide which of their punch line cards they want to play. So maybe you’d end up with these statements:

The reader then gets to choose their favorite punch line, and the owner of that card gets a point!

This peggable game features 30 all new setup cards and 150 all new punch lines. Foxworthy originally created the game with laughter in mind, inspired by the insanity of his own family and friends. And because the insanity never ends, he keeps on writing more cards! Relative Insanity Expansion/Travel Pack is a fun game on its own, or added to the original game, and is for 4 to 12 players, ages 14 to adult, and lands on shelves in Summer 2019.

Jeff Foxworthy is one of the most respected and successful comedians in the country. He is the largest selling comedy-recording artist in history, a multiple Grammy Award nominee and best-selling author of 11 books. Widely known for his Blue Collar Comedy Tour and redneck jokes, his act goes well beyond that to explore the humor in everyday family interactions and human nature.