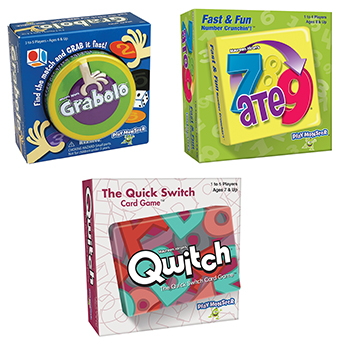 7 ATE 9TM challenges players to quickly add or subtract 1, 2 or 3 to match the numbers on the cards in their hands so they can discard. The first to play all their cards wins! It’s think-fast fun for 1 to 4 players ages 8 and up.

Grabolo®, the Maureen Hiron game that started the line at PlayMonster in 2016, challenges players to race and find the card the matched the color/number combination of the dice roll. The first player to grab it keeps it, but beware…it could get stolen later! For 3 to 5 players, ages 6 and up.

Each of these family-friendly card games is available for a suggested retail price of $9.99 each, and is packaged in a colorful and handy storage tin.