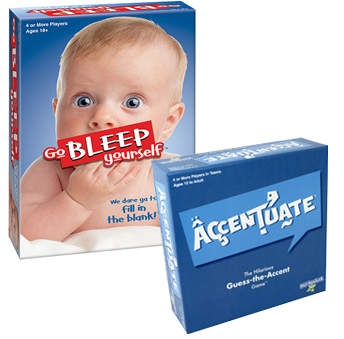 PlayMonster Brings Life to the Party with Two New Games

Accentuate® and Go BLEEP Yourself® Will Have Players Laughing!

Accentuate is the hilarious guess-the-accent game! One player reads a movie quote, and then rereads it in a randomly chosen accent while their team tries to guess which accent they’re trying to speak! It’s often hilarious because not everyone is good at every accent. Plus, it’s funny to hear a Rom-Com quoted in a Transylvanian Vampire accent, or an action flick in a Jamaican accent, etc. Players also get extra points for knowing the movie that’s quoted! It’s big fun for 4 or more players in teams, ages 12 and up. Accentuate is available for a suggested retail price of $24.99.

Go BLEEP Yourself can get as wild, or stay as tame, as players want because they’re filling in the BLEEPs! One player reads a card like, “I picked up BLEEP on the street today.” Then everyone writes down a word to take the place of the BLEEP. Players are trying to match what they think the reader will say, or they try to write the funniest answer… because both score points! Available for a suggested retail price of $24.99, Go BLEEP Yourself is a laughing good time for 4 or more players, ages 18+.

Both games are great for face-to-face interaction and good times with friends and family!

About PlayMonster LLC
Beloit, WI-based PlayMonster is a toy and game company that believes in the power of play to make a positive difference in people’s lives. Delivering great play value by designing, manufacturing and marketing innovative, fun products such as “TOTY Game of the Year” Yeti in My Spaghetti®, along with other award-winning toys and games like The Game of THINGS…®, 5 Second Rule®, Mirari®, Farkle, OK to Wake!®, My Fairy Garden®, Wonder Crew®, Automoblox® and Marbleocity® is how PlayMonster helps keep play alive for all ages.